There are all sorts of sophisticated self-check activities out there, ones that look stunning but seem to require artistic abilities that I don’t possess,  props one needs to get a hold of  (such as clear plastic covers of chocolate boxes) or are simply too time-consuming to create.

There are countless variations, such as using puzzle pieces and dominoes and many more. I truly admire these activities and their creators.

Such sophistication is simply not for me. Not anymore.

However,  I did want an effective self-check exercise that I could make on my own, one which I could sneak in a few words from the Band Two Word List that students need to practice.

Particularly one which I could prepare easily.

Easy to prepare like the self-check activity involving two-sided index cards. A student begins with the card that says START, flips it over, matches it to its corresponding index card, flips that one over, and continues matching until he/she reaches the card that says THE END.  If the student flips over THE END  before all the cards have been matched then a mistake has been made, and he/she will have to backtrack.

I learned of this activity many years ago from Tal Papo. I’m sure many of you are familiar with it!

In my learning center for Deaf and hard of hearing high school students, the students progress at different paces. That means that each student is ready for a review activity related to the story they have just completed at a different time.

In this particular case, the story in question is called “Thank You, Ma’am” by Langston Hughes.

The word “description” ignited the idea for the activity.  The word “belong” fit in nicely too.  The vocabulary items “crime” and “pair” are also on the list. 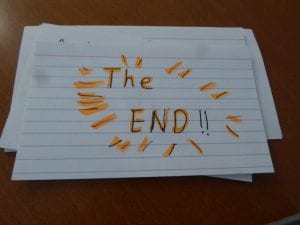 I hope you find it useful too!

“Every summer Lin Kong returned to Goose Village to divorce his wife, Shuyu”.

The book is clever and unexpected.

For one thing, I wondered how long the author, Jin,  could keep up the main storyline of the book without becoming tiresome – it’s no spoiler to say that the hero is an army doctor, there is a nurse at the military hospital and a wife back in Goose Village.

Jin held my interest for all of the 308 pages.

The book was even more unexpected in the sense of how much background information about rural China (both historical and cultural) and social commentary Jin conveys in an indirect and subtle manner. There are no direct horror stories of “The Cultural Revolution”, nor does the quiet military doctor actively participate in any of the enterprising initiatives that open up later. But as the story unfolds, a clear picture of what it is like to live in an extremely controlled society, one in which you never seem to be truly alone, emerges as well.

Another example of a THANK YOU, LIBRARY” book – books that I find there when I stop looking for books I’ve heard about.

There is something intimidating about looking at very long lists of vocabulary items, each list spanning several pages of words written in three columns. There is this feeling of being lost in a wood where the trees are made of words.

Fortunately, technology makes it so much easier to deal with such word lists. I found myself introducing the “control F” function on the computer to several teachers over the last two weeks. Holding down those two keys open a “dialogue box” that allows you to type in a word. If the word appears in the list, you will be magically transported to the right place. If those letters appear in other words as well, those places will also be shown, but the little number on the side of the “box” shows you the number of words available. There are arrows to move between the words.

It particularly came in handy while I was thinking about the character of Sophie, George’s sister in the story “A Summer’s Reading” by Malamud. She’s a very minor character in the story but I thought that adding her point of view could give me a useful way to review the story,  practice vocabulary from the word list in context and the higher order thinking skill known as “distinguishing different perspectives” all in one go.  It’s quite easy to imagine some things Sophie might have thought in reference to her brother.

I identified 58 vocabulary items from the Band 3 word list as words to use while teaching this story. You can find them on the Quizlet list here: https://quizlet.com/361845610/a-summers-reading-flash-cards/

I wrote sentences on index cards. Each sentence uses a vocabulary item from the list (a word or a chunk) and a few use two words. The words are highlighted in orange. I used 28 items from the Quizlet list. Each index card presents a statement one of the characters in the story may have thought or said. These are not sentences from the story itself!

My class of Deaf and hard of hearing students and I read each card together and then discussed who might have said/thought such a thing. It was really great to see how they explained to each other which parts of the sentences gave them the information they needed to decide from whose perspective it was written. The students were very involved in the activity without officially turning it into a game.  The students could be asked to read the sentences out loud “in character”, but I haven’t tried that yet. Frankly, I was very pleased with the students’ reactions!

Here are examples of sentences from Sophie’s point of view. The activity also includes George’s and Mr. Cattanzara’s possible statements. For the full list of sentences,  click on the title of the attached word document below (you can download it). I hope you find the activity helpful too!

“He won’t come out of his room. I don’t know how he can breathe in there! It is very hot.”

“I don’t understand. He says he is reading books but I don’t see any evidence around the house. Is he telling the truth?”

“Working in a cafeteria in the Bronx means that I’m not home during the day”.

“I wish he would get a job! it would enable us to stop living in poverty!”

“Our mother’s absence really made a difference in our lives. I have to live at home and take care of my father and brother”.

Or as George may have said, sadly:

“Getting some money from my sister is my only source of income“.