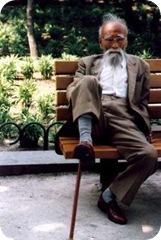 Our local library has something special – a reader’s “gift” corner.

Any person looking for a “new home” for some of his /her books can place them in this corner, near the entrance. Sometimes the library itself adds books that they have multiple copies of but don’t seem to be leaving the shelf.

People place a wide variety of things there, ranging from old encyclopedia volumes, trashy novels, auto magazines and old textbooks. The books are in different languages.

Sometimes I find a real treasure there, like this book!

I’m enjoying it immensely! Paul Theroux travelled, in 1986 from London to China by train, and then extensively in China.  His descriptions are so vivid and he writes so nicely! He spent a lot of time talking to people (in their language!) which makes the tale particularly interesting.

There have already been several mentions of English teaching. He taught English in Singapore before this journey. In Beijing (in the book it is still Peking) he taught English at a night school for a while. In Shanghai he encounters a regular English day at a park – a grass roots “institution” where people converged to learn and practice English. This was before the arrival of the Internet…

My son pointed out that it is somewhat illogical that I began reading the “gift” book and not the other two books I brought from the library which have a due date, but who has to be logical all the time?!