When I read the post “O is for Open Space” on Scott Thornbury’s blog I realized that I have had (and continue to have) personal experience with learning and teaching in a similar framework. Many of my experiences have been  positive, some have not.

Part One – My Experiences as a Pupil

As a child I attended Pierce School in Brookline, Mass, USA. Although only part of my last year at the school was spent in the new specially designed open space building (with ONLY two classrooms and bathrooms that weren’t “Open Space”, read the description here) the school had been functioning according to this approach within the constraints of a red brick schoolhouse.

Second and third grade were mixed classes. So were fourth and fifth grade. In my second/third grade class we were 26 pupils with a teacher and three student-teachers. The room was very large and had “corners”. There was a reading loft with cushions, an animal corner (rabbits, turtles, mice and a boa-constrictor), a play area with a small wooden play house and two areas (maybe three, it was a long time ago!) where there were tables bunched together. There was a chalk blackboard on a side wall. That’s where our beloved teacher posted the tasks that had to be completed that day. You could choose to do them whenever you wanted during the day, in any order. The teacher and student-teachers ran small groups during the day related to the tasks and you could choose which ones to join and when. It was very cold most of the year in Boston and the school did not have a playground. There was no specific recess – you played between other activities.

There were no tests that I can recall, except for dictations that our exasperated 4th/5th grade teacher gave when she received a class of non-spellers. Instead of report cards there were conference sheets that the child filled out while sitting with the teacher. 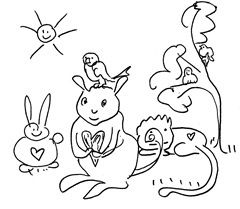 Sounds like heaven, doesn’t it? And that was just a brief description! I really liked going to school during those years! However, roses have thorns and there were drawbacks.

Some students were unable to plan their time and get the work done. There were students who spent part of the day in a different , small classroom, where they could concentrate.

I wasn’t interested in them. I had no trouble organizing my time and was busy writing stories and plays. I was a “good girl”. Nobody seemed to notice that I elegantly avoided joining math groups. When I did participate nobody noticed that I was unable to connect activities using mirrors or measuring  leaves to actual numbers and didn’t understand the concepts. I didn’t fail any tests because there weren’t any and no red flags were raised. Fostering creativity was important and I thrived in that respect!

I needed private math tutoring from 6th grade (when I moved to Israel) through high-school. The private tutors helped me stay afloat, except for one year.

That was the year we moved to a high school where the classes were divided according to general academic ability. There was no grouping according to level for math. I was placed in a class with bright, and quick pupils. The kind that always seem to be having fun yet know all the answers and get good grades. I wasn’t quick by any definition and was the kind who needed to study.

I failed math that year.

It was only the following year when they created a special math class for all the failing kids did I find the setting in which I could learn math. All the other kids were like me, we weren’t embarrassed when we made stupid errors – we were all in the same boat! Being in that small class of the lowest graded level was the best thing that the school did for me. I actually did pretty well on my math finals but numbers remain an intimidating thing for me till this day.