There is a delightful article by Stephen Reilly in the March-April 2012 issue of “Voices” entitled “I remember you”.

“Beginner-lever learners posses a wider and deeper word-base of English than they realize and unearthing this offers them foundations they can build on”.

I heartily agree that “unearthing” these words gives the students a sense of pride that they actually DO know some English and can serve as a “springboard” for learning. 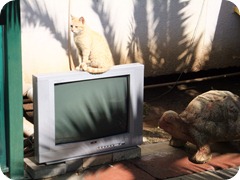 However, when using internationally –known words, the teacher must be constantly alert for cultural interference. When the student’s face lights up and he “crows” “Oh, I know this word”, is that student ascribing the same meaning to that word in English that you are?

In the United Sates, a cottage is a very simple form of dwelling. Something you might have by the lake as a fishing retreat, very modest. In Israel you would hear someone say: “Did you see that awesome cottage he just moved into?! What a place!” Most certainly not a plain, modest, rudimentary abode!

The word  test in Israel refers to the written part of the driving exam. Students are often confused when they encounter the word in texts and try to find a connection to driving. As this meaning seems to be so entrenched I have resorted to placing little signs with the word “test” on the desks during exams. Having the word at the top of the students exam papers had no effect at all.

In fact, the word student itself is a problem. In Israel students are only those who study at university. A sentence describing a first-grade student can be very puzzling!

There are many more examples.

I would like to add a word of caution regarding use of such words as a tool for learning the sounds of the letters. Many words entered the language from English in a somewhat mangled form. How many people properly pronounce the letter “H” in hamburger? Many would swear that is an “ambuger”!

I’m assuming that this phenomenon is true in other countries as well, as it seems logical that it would be.

Can you tell me if my assumption is correct?