In case you haven’t noticed, I’ve announced a standing invitation to our ELTchatters around the world – come, present at a conference (or give a workshop), tour the famous sites, and get a home cooked dinner (with friends) at my place!

Before Shelly walked in the door, while I was cooking, I was wondering about what it would be like to meet someone face to face that I had only known virtually. How different are our online personas? Would it be akward? Would the conversation flow? 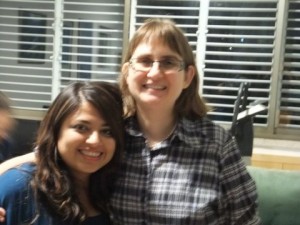 I don’t have any answers to the general question but I can clearly state that Shelly is as friendly, sweet and fascinating in real life as she is online! And there was no akwardness either! For anyone!

I was particularly glad to thank Shelly personally for helping me REALLY start blogging. About two months after I had begun my blog, still “feeling the way”  I began participating in Shelly’s 30 Goal Project. After posting about each of those 30 ways to reflect on my carreer as a teacher, I not only learned a a great deal but became a confident blogger! Shelly was most encouraging in those early days!

Since I was the host I forgot to take a picture of the table. Know that dinner invitations to my house include such staples as cheese lasagne, corn fritters, spinach quiche, chick pea/tahini burgers and lots of salads. Dessert includes my one specialty (in the baking dept.) brownies and fruit. But I DID take a picture (afterwards)  of one of the table decorations – the “Penguin Oscar”. Shelly told me that a lot of people think my puffin symbol is a penguin anyway so that worked well!