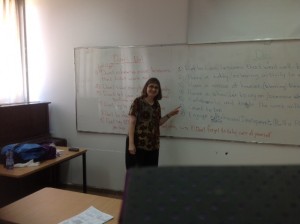 Things didn’t turn out as I expected them to but not all was lost. In fact something was gained.

First, the sad truth – only two teachers attended the session. I took a picture of the wall of classroom ( I came early) and the message was apt: 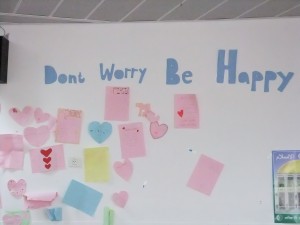 There are many reasons for this. As ETAI has been my home turf for over 20 years and I’ve experienced both ends of the spectrum (more than 45 teachers, some sitting on the floor, when presenting practical srategies for the classroom, to talks with 2 or three people when presenting about students with a hearing loss) I know the reasons aren’t personal.

There were 10 sessions going on at the same time. People came up to me and said they weren’t coming because they really couldn’t miss the session on using body language in class or the one on accomodations for students with a learning disability on national exams because they needed this for class.

In addition, it was supposed to be an ETAI output thing. I did not “bug” the conveners enough so as to have it in planned as part of one the general conference sessions. In all fairness, I hadn’t given enough thought to that aspectand was busy teaching – that’s hindsight.

More hindsight is that it turns out there was wifi at the venue – a nice idea would to have teachers over twitter contibuting their suggestions. 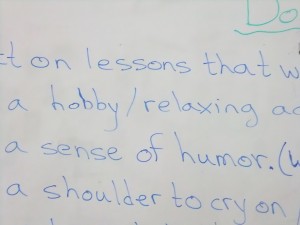 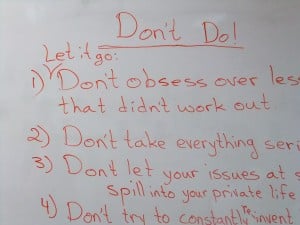 The teachers that did come were wonderful! They are very experienced and took the topic very seriously. We had the kind of discussion I envisioned and it was great! You would think that with so few teachers there would be no reason to elaborate and make your case but the limit to only seven items really caused us to discuss which points are THE ones to get across.

And now I’ve had some (albeit small) experience being a moderator!

The fact that there IS an output from this session means the ball will continue rolling. I’ve already begun drawing attention to the list we produced!