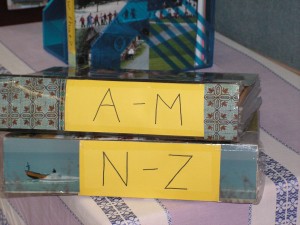 All summer vacation I had an unpleasant, nagging thought which I tried with all my might to ignore:

“I hope they don’t take my classroom away”.

Discovering the week before school begins that I no longer had a designated English room was not an unfounded fear. The previous school year had ended with an ugly change of administration and with the information that the school would be growing. In fact, we were told that caravans may have to be brought in as temporary solution.

In addition, that exact scenario did happen once, three principals ago ( I’ve seen quite a few principals come and go…). I came to school like I did this morning, to start unpacking the closets and setting up the classroom for the first day of the new school year. It was a different room back then, much smaller and in the main building. I found my two closets in a side niche of a corridor and my own overhead projector (it was donated to me, personally, not to the school!) added to the school’s stock of OVP’s. Luckily mine had a very distinctive label with the name ELMO on it so it was quite clear which one it was.

I was told, after I asked (!!!!) that the school had grown and they needed the room.

It was because of Elmo, the overhead projector, that I was given another room. When I met with the principal I told her that all this equipment I had personally gotten from donors would have to be returned to them along with the explanation that they could no longer be used for teaching English to deaf and hard of hearing students, as the school had other priorities. To be honest, I’m amazed I was able to say that to the principal as she was very intimidating and I’m not known for being eloquent when I’m upset.

I’m still in the room I got back then. Its in the yard, its sort of a makeshift room that was added on and it has some problems. But I think I’m lucky it is so. Because it wasn’t my room in the yard that was rennovated this summer and transformed into a regular classroom, it was a different one. I don’t know the details yet regarding where the other teacher will be teaching and what she was or wasn’t told in advance. I’ll see her at the general staff meeting on Thursday and find out.

2 thoughts on “Impolite Relief: It Wasn’t Mine!”