It was the day before school began. Another teacher stood at the doorway, surveying the complete facelift the little classroom had undergone. She didn’t say a word.

“It’s too red, too loud, isn’t it?” I prompted worriedly. I hadn’t really planned on red table coverings for the different work stations. Especially as some of the coverings (some!) have polka dots. But I’m not known for my taste in matching colors and we already had some red coverings available so I was convinced red was the way to go. By August 31st  we had the stations all set up and I was feeling quite overwhelmed by the red and worried that the whole idea wouldn’t work. 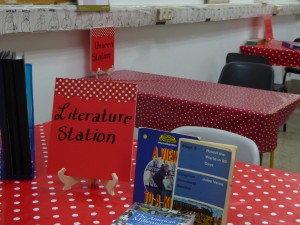 I had been teaching in the format of a learning center for many years. In fact, a great many years if you count all the years I didn’t call it that. To me it seems the only way to deal with the absolutely huge differences in level and ability in every class of deaf and hard of hearing students I have ever taught.

But for a large portion of that time, I had a large classroom. It was easier to have students working on different things at the same time without bothering each other. 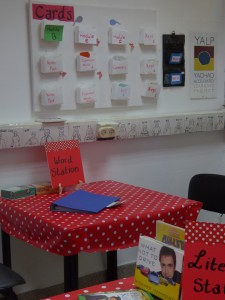 The whole system was in risk of collapsing last year when we moved to a much smaller classroom. All my efforts to resist having the tables arranged in the traditional semi-circle facing the board (so students who can’t hear well can see each other as well as the teacher) failed.  The students would push them back, the cleaning lady would push them back. There didn’t seem to be enough room – it was too distracting.

And now I was worried that the red (especially with the polka dots!) would be distracting! 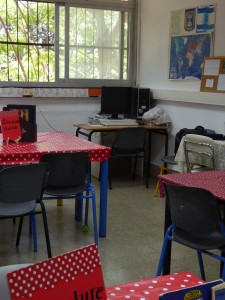 “It is a bit loud” she said. “But just tell the students to imagine they are in a French Cafe. It will be okay”.

And it is. Really. The room feels much bigger. Even when I have students going off-task and the classroom is full, they don’t bother the other students. The distance between the students has grown and the whole atmosphere is more relaxed. The red doesn’t seem too loud anymore, just cheery. Much of it is, of course, covered most of the lesson with papers and books.

The strangest thing to me is that almost none of my students commented on the change or the colors. EVERY SINGLE ONE commented on the fact that we had finally gotten a new, good quality door to the classroom, but most ignored the changes! Meanwhile, students from the “hearing” classrooms stop by to peek in and go ecstatic, saying that they want to study here too…

That teacher was absolutely right about the French Cafe image. On a recent family trip to France we stopped to eat lunch, and the sidewalk tables had  THE EXACT SAME TABLE COVERINGS!