Note: This is part five of a new Saturday series, in which I, with crowdsourcing help, try to unravel the mysteries hidden in previously unknown letters written by my mysterious step-great aunt Dvora /Dora before and during WWll in Poland. For further explanations see previous post.

Today’s letter is not dated, but it must have been written in November 1937, since Dora writes that she will graduate in six months. We know from the first letter that I posted that she graduated in May 1938.

In this letter it is clear that Dora was not very impressed with the manners of an American visitor, an American who was once a townsman… The letter is torn in places. Any thoughts as to what the missing words may have been are appreciated. There are also two words I cannot make out. As always, I have not changed grammar or spelling.

There passed already a long time that did not write to you anything. I am very busy, many times I sit till twelve and one o’clock in the night and learn. I finish this year the school and I must get a maturity test (called here matura). It is very difficult, because I shall be asked __________ (missing word) a ???? ( word I can’t make out) which consisted of not y________ (only the first letter of missing word remains) so that it is difficult to get such _______________ (missing). 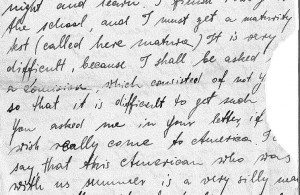 You asked me in your letter if I wish really come to America. I can say that this American who was with us summer is a very silly man if he thought about this seriously. He saw that my mother is a sick woman, so that I can not leave the house. I am not yet in such bad conditions here in Poland.

Write me more, not so as I to you because you must understand that I have not free time on the second year. After 6 months I shall write to  you more, it will be after the examine.

I think that in the first part I shall be asked by a commision (the board of examiners) which consisted of not (probably) your teachers??? usually Matura exam cant be taken in a presence of teachers who taught you but independent teachers ( from other classes who do not know you) the examiner has to be neutral

and in the second part we usually call someone who is not kind to us who behaves rudely and sometimes unfairly we call such a person “Świnia” which means “pig” (I believe that she found the name sow for a female pig and he didn’t give to a house girl (house maid) who served him a penny. It is a kind of grattude to the “servants” to give them tips, but he didn’t give a penny

2 thoughts on “Saturday’s Mystery: Who Were You, Dora? Crowdsourcing Q.4”