Alice began her exciting and enlightening adventures in Wonderland by falling down a rabbit hole. A hole belonging to a rabbit very concerned with the time, to be precise.

I also began our Heritage Journey back in time with a fall. I miscalculated the number of steps when disembarking  (at one a.m!) at Brest Train Station (Belarus) and tumbled onto the platform.

While Alice’s white rabbit proved to be a rather elusive guide to Wonderland, thankfully our guide Andrei Burdenkov never left our side. Because we actually were in two versions of Wonderland – present day Belarus and Early 20th Century Russia/Poland/Russia (today – Belarus, it changed hands a lot).  We needed the guide to understand the first and to be able to see what remains of the second. You really need to know where to look, especially to see the finer details.

We don’t speak a word of Russian nor can we read the Cyrillic alphabet. During our entire four days in the two cities we were researching (Brest and Volkovysk) and the two villages (Antopol and Volpa) I think we only saw three signs in English (and actually one was in a national nature reserve). Not only don’t  almost all the hotel receptionists and waiters we encountered speak any English, the concept of customer service in state run-places seems very shaky. Most staff members won’t smile and some make you feel that you should be grateful they are giving you the time of day! But it isn’t just the language barrier. When we entered a small supermarket (small, but bigger than a min-market) we couldn’t understand what we had done to elicit an angry tone and finger being shaken at us. Roni had chosen 3 bananas from the fruit section and walked over to join me in the baked goods section (Andrei was over in the milk section). It turned out there are four cashiers scattered around the small supermarket and you must pay for the goods in each section before moving on to the next section! The idea never occured to us. This is not the case in the large supermarket we later saw, by the way. Being a vegetarian (that’s Roni) in Belarus is quite a challenge. Meat, in some form or other, seems to be included in almost every single dish. Andrei patiently translated menus and negotiated with waiters to find solutions.

On the other hand, people we met were very friendly (with Andrei supplying simultaneous translation, of course!). These encounters and conversations added greatly to visualising what life was like during the pre-war years of the 20th century. We even had an amazing meeting with a school teacher who came up with a novel way to teach the children about their village’s former residents who perished. I’ll be describing  what we found and did not find in much more detail in the next posts.

In the villages it was easier to get a sense of what life was like once.  You can find houses that remain forlornly untouched. In the cities it is much harder. Technology helped  compare old maps to new ones and we found many of the relevant locations despite changes. Sadly, some of the remnants of the graveyards don’t look like anything more than a field strewed with a handful of larger stones. One wouldn’t give them a second glance if you didn’t know what to look for. In some places the graveyards no longer exist at all. Heartbreaking.

But in our search for “life”, even spending time outdoors, getting to know the landscape was an important part of the experience. Our ancestors grew up in this flat country with wide open spaces, endless skies, marsh lands, rivers, storks nesting on poles, lots of trees and really cold weather, that makes it is hard to grow things. 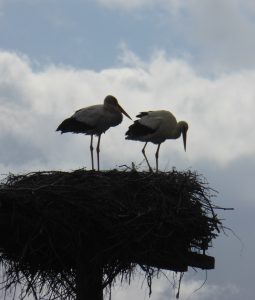 This was the backdrop of their lives.

6 thoughts on “Who were you, Dora? First Notes from a Journey Back in TIME”