Note – This is post number five and our final stop on our Heritage Trip to Belarus. Once again, we were dealing with the time period in which Dora lived, but since our relatives from here are from my husband’s side, this post is not strictly part of the “Dora posts” series.

Imagine you are a student in a small rural school, in a small, sleepy village. One day your teacher takes your class out for an unusual kind of “treasure hunt” around the village, a sort of “story in a suitcase”. At each stop along the way, you meet Basya (one of the older school girls played Basya, dressed up in the old style), supposedly a Jewish girl who once lived here, who tells you what  once used to happen on this spot. The girl’s name was taken from a class photo. In the last years before the Nazi’s took over a few Jewish girls studied in the local school.

Imagine Basya explaining that Jews had different places to buy food because of the dietary laws. She would have used  this photo to show that all the children were neighbors and could play together.

Now you must imagine how the walk around the village ends – with Basya revealing that only her spirit could remain in Volpa, since she perished along with all the other Jewish residents (only one survivor).

Can you imagine planning such a tour for the school children?! I was dumbfounded to learn of this project that the amazing history teacher Teresa Kudrik organized. Teachers can work magic, you know! Even more so to learn that Teresa had been on a course at Yad Va-Shem in Jerusalem!

In the Jewish section of the museum they used pictures from the Volkovysk Yizkor Book (Memorial Book), where Volpa is mentioned. This was the first place on the trip where we found the complete list of names of the former Jewish residents that perished. We did not encounter such  a list in Antopol or in Volkovysk. It was also our first encounter with someone who was delighted (in fact, the first real smile we encountered on the trip!) to hear that Roni’s grandparents were from Volpa and was happy to receive copies of the few photos we have from those days, for the museum.

As a teacher, I was also very interested in the school itself. It was very modern looking and attractive. We got to see the fine computer lab and the biology lab. I was surprised to see chalk boards in use but Andrei explained that chalk is abundant in these parts. The classes are very small, the number of residents in such villages is dwindling.

We took a short walk around town before heading back to the cemetery. We had actually started with the cemetery, if you could call it that. We never would have found it on our own, it is so very easy to miss entirely. Andrei had coordinates. There’s barely anything to see, tall grass (with ticks!) and no fence. But at the museum we learned that a memorial marker had been erected there and so we returned to find it. 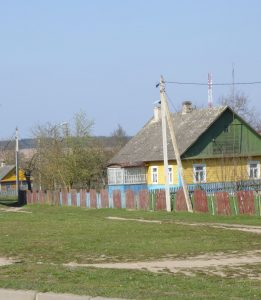 Our guide, Andrei Burdenkov, prepared this video “Driving through Volpa”