This is the first year that I am teaching the poem “As I Grow Older” by Langston Hughes to high school students at several levels, not just to the students at the highest level. I am very pleased by the decision.

The lead-in activity focusing on the metaphor of the wall (and not on giving a historical background) clarified it well for my students. You can find the activity here:  Shifting the Focus of Pre-Reading Tasks

However, my weaker students needed more practice in remembering the vocabulary items used in the poem so that we could focus on analysis and interpretation.

It occurred to me that this was a good time to start trying to put some principles into practice. I’m fortunate to be taking an in-service training course with the fascinating Debbie Ben Tura on the use of drama in EFL lessons (thanks to the awesome Regina Shraybman who brought the course to our school!).

Obviously, I couldn’t read the poem out dramatically in English while groups of students act out the lines they hear. Many of my students this year are quite Deaf and communicate mainly in Sign – Language. However, I did not want to miss out on the connection between acting, movement, and retention.

So here’s what I did.

I took scrap paper and wrote out twelve verses from the poem in large letters. Not beautiful, not laminated, just readable from afar. These pages will be thrown out soon. See here: 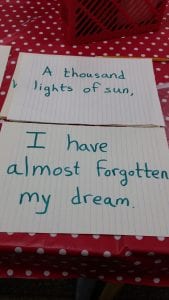 One student was “the teacher”. Another student was placed in charge of the stopwatch on a cell phone. I explained that each student would mime out each verse on a page, as shown by “the teacher” and the time it took them to do so would be recorded on the board. We agreed that some use of Sign Language would be allowed as long as it was combined with acting dramatically (standing stiffly and just signing was banned).

The students immediately asked for a review of the sentences before we began and I, naturally, was happy to oblige.

The weakest student had the role of playing “teacher” – by the time it was his turn the verses had been acted out five times before with “reminders” in between. He needed some help but felt confident enough to participate.

The students helped me stick the pages with the verses on the board.

One by one a student came to the board. Each of the other students had to act out two verses (we went around twice) and the student by the board had to point to the sentence being acted out. If they pointed to the wrong sentence I intervened until they found the right one, which of course “cost time”. Again we wrote scores on the board. If someone wanted a review before his /her turn at the whiteboard, the group was able to explain the forgotten items. I didn’t have to do it!

The big pages are now going into the trash bin. I had students copy the verses onto index cards which I plan to use in other ways next week.

Drama, poetry, and vocabulary can be so much fun!