Additional Title: When I’m creating content on the computer and my students are using a cell phone…

I have no idea how often I’ll be meeting my students in person at school at the beginning of this year or teaching them online. I’m not sure anyone knows at the moment. My best bet for creating new materials seems to be creating ones that can be printed out and used in class or used online. Having something ready comforts me a bit amidst all this uncertainty.

Therefore I’ve decided that it would be very helpful for me to begin the school year with some texts that are divided into chunks and include glossaries. I have found that struggling learners also appreciate having the text in a “box” and, in cases of multiple-choice questions, having the question above the distractors underlined.

Part One – Creating the Glossary

Just like any student, I DID remember that I had once learned how to create a glossary, but many years have passed since then and I had no idea how to do it. 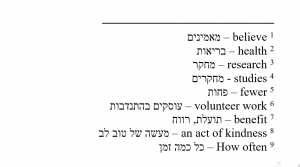 Looks really respectable right? Not a messy jumble of words in a box under the text!

I was totally taken by surprise when I accidentally discovered that once the glossary was created, hovering with your mouse over the word brings up the glossed translation without you having to shift your gaze to the bottom of the page! Having the translation appear above the word as you read is far less disruptive to the flow of reading!

It looks like this (note the little text box above the word): 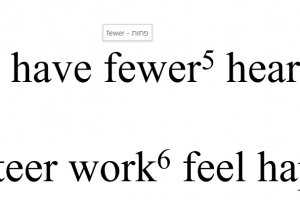 I was very excited! I was sure that once my students learned how to take advantage of this they would appreciate this feature. I do not recall ever hearing about this in any Ed-Tech talks I have attended.

As I always do with any worksheet that I create and share with students and other teachers, I saved the document as a PDF. It’s a common practice used to avoid having your students mess up the text as they are working on it.

That cool feature of the glossed items hovering above the text that we’ve been discussing? It disappeared completely.

The feature does not work when saved as a PDF document.

I asked myself – how often have I seen students ruin or erase part of the digital text they were working on? The only relevant experience I’ve had is when students used to work on the classroom computer. Almost all my worksheets on these computers have remained in WORD and I’ve had very few cases of students accidentally erasing the exercise or distorting the text.  Since the originals are saved it has never been “an issue”.

I decided to try using a WORD document with the students, without saving it as a PDF file.

Fortunately, I had the opportunity to try it out with two students who came to school for the second round of national exams that we had recently.

When they opened the document on their cell phones, not only did the “cool feature” not work, the entire glossary disappeared! No little numbers and words on the bottom of the page at all.

The glossary looked great on the students’ cell-phones when I sent it to them as a PDF file.

My original goal was to have a text with a respectable glossary that would be clear on whatever device the students are using. That goal has been achieved.

How to add a glossary to a worksheet

4 thoughts on “All I Wanted was to Create a Glossary, yet I Found Myself Embarking on a Journey!”