It’s really hard to write about.

I’ve been making every effort to focus on the LIFE that once was before all hell broke loose, but the bones are, quite literally, crying out their reminder of the DEATH.

This post is an unplanned postscript to the Saturday Series, in which I, with crowdsourcing help, try to unravel the mysteries hidden in previously unknown letters written by my mysterious step-great aunt Dvora /Dora before and during WWll in what was then Poland.  For further explanations about the series see the previous post here.

As I wrote in my posts,  my goal was (and continues to be) to find out as much as possible about Dora’s LIFE – the schools she went to, how she spent her time, what her neighborhood looked like and more. The LIFE she lived in Brest, Belarus (then Poland) before its violent end,  most likely on October 15, 1942,  aged 22, at nearby Bronnaya Gora.  Dora and her father were registered by the Nazis when entering the Brest Ghetto in November 1941, as you can see here. Dora’s name is on line four. Her father’s name is the one on the last line.  To read about the fate of those who entered that Ghetto, read here. 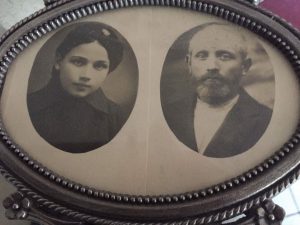 But was that Dora’s fate as well or was the following how her life ended?

In February of 2019, on a  construction site of an apartment block in Brest (Dora would have referred called it “Brisk”)  the remains of about one thousand murdered Jews was discovered, with bullet holes. Remains of people of all ages. The site is on the location of the Brest Ghetto. It seems that those who somehow managed to escape the massacre of October 15 were murdered here. This is a link to the BBC post which will give you more information, without pictures of the bones themselves – those can be found on other sites.

I can’t possibly answer and will not try to answer the question of whether or not Dora’s remains were there as well.

What I can do is repost Dora’s last letter here, dated August 25, 1940, when she was 20, years old, her dreams of going to university long gone.  It is fitting to reread her words.

Your postcard procured us a great pleasure because we did not hope yet to get letters from you. Nearly a whole year passed that we did not correspond one with the other and has delightfully is that we can at last write one to the other. I forgot almost write English during the time, because I am not using it.

What to me I have none news. As you know I did not succeed in life to this time. I must reconcile with that. The housework is very not interesting and I am busy day by day at house.

From Palestine we have not any letter. There is very unquietly. The father works at a state working place. He will also write you a letter the next days.

Write as soon as you will get this card. Let us hear good news one from the other and the rest family.

Watching the footage of the fire at the Notre Dame Cathedral in Paris yesterday was really difficult – so very sad.

Like countless others, I found myself thinking of Quasimodo, the main character in Hugo’s famous book “The Hunchback of Notre Dame” and of Walt Disney’s animated film, who spent his life living at the cathedral.

Quasimodo’s thoughts or feelings interested no one.  You might say his voice wasn’t heard. Speaking of hearing, you may recall that Quasimodo was deaf, a hearing loss caused by being in close proximity to the church bells on a permanent basis.

Deaf…hmmm… I can imagine Quasimodo being a student of mine… I would like to believe he would be “heard” in our classroom.

Luckily, Jennifer Gonzalez channeled such thoughts of mine pertaining to alternate realities into the infinitely more practical realm of the classroom and staff room in her post “The Magic of Validation” (thanks to Adam Welcome for pointing the way!).

I mean actual reality. Gonzalez takes the somewhat abstract sounding concept of validation (which we’ve all heard about before) and breaks it down into sections, including why validating matters, how it is done and why we resist validating. Her examples could be taken from almost any classroom or staff room.

Schools are a place in which conflicts arise – diffusing conflicts before they escalate into unnecessarily explosive situations with “negative snowball side effects”  is a highly relevant skill.

We need to hear Gonzalez’s reminder, again and again (and spread the word!) that validating a colleague’s feelings does not mean you agree with his/her opinion and are now going to do everything her way. Validating a student’s opinion does not mean you have to be “touchy -feely“: “Okay, validation doesn’t have to look and sound like you’re in a therapist’s office. You can develop your own style. It can sound tough, it can be quick…”

If Gonzalez can quote her gym teacher, I can quote my gym teacher too (I’m most certainly not doing CrossFit, by the way!): “I know this exercise is hard for you, Naomi. That’s exactly why it is important for you to keep doing it!”

Gonzalez doesn’t talk about the numbers of students in a class. I’m concerned that class size matters. How do my colleagues who teach classes of 40 students manage to make every student feel heard? Don’t ask me – I’m a teacher of Students with Special Needs, my classes are small! Perhaps part of the answer lies in this quote from the post “The thing to remember is that validation is not necessary in all interactions…”

You see, people want to be heard. Despite rumors to the contrary, students and teachers are people too.

There may all sorts of luck in this world but I am certainly a “book – lucky” kind of person.

The book Pompeii was waiting for me in the “readers for readers” corner outside the local library. Slightly water damaged but otherwise in good condition.

It just so happens that I plan to be in Pompeii, Italy NEXT WEEK!

This is not an academic book nor a travel guide-book! Harris managed to create an “absolutely-can’t-put-down” book full of action, suspense, and surprising turns even though the end is clear and known in advance. That volcano is going to erupt and the author knows you know it.

But the people in the story don’t know it.

I’ve read a book by Harris before, he researches the history behind his fictional books meticulously. Harris brings to life the people, the sights, sounds, and smells (it seems many think stank in those days, despite the Roman baths!) of Pompeii in its heyday, In addition, the story is told from the point of view of “The Aquarius” – the title held by an engineer in charge of an aqueduct.  I feel as if I’ve been personally introduced to the awe-inspiring wonders of the Roman Empire’s water system. To think that rich citizens back then could have RUNNING WATER in their homes, some even had hot and cold taps (pipes led to their homes), a version of toilets and swimming pools in the FIRST CENTURY AD is mind-boggling when you think about running water around the world for the centuries that followed…

If all that wasn’t enough, I really enjoyed Harris’ use of language. The descriptions are rich and vivid.

In short – this was certainly a book to “get lost” in.