A student explaining why he won’t be attending our English lessons at school tomorrow along with his  Deaf and hard of hearing peers. His “hearing” classmates are still studying remotely and he studies quite a few subjects with them.  He needs to stay at home in order to attend his online lessons.

A student puzzled as to why she had lost points on her exam. She answered a question incorrectly after translating the word “plane” as a flat surface instead of an aircraft, despite a very clear context of travel and hints such as “….while on the plane to England…” The exam took place in class and the student had an electronic dictionary. The student admitted that far from my watchful eyes, during “the remote learning days,” she had been relying on Google to translate complete sentences instead of adhering to the “one-word-at-a-time” rule that I enforce in class.

3. ” I have a piece of paper from the airport that says I don’t have to be quarantined, so don’t worry”.

A student who arrived in class directly after returning from an extended holiday in London the night before.  England was about to change its tourist status to RED because of the surging number of Covid 19 cases, which would make quarantine mandatory. However, my student returned 48 hours before the status change, armed with a document claiming that he could proceed with life as usual. This was at a time when the rest of us weren’t  even supposed to go to a neighboring city! As you may have guessed, I did not feel reassured by his document.  Thankfully, it’s been three weeks since then and we all  appear to be healthy.

4. “I was about to join the volleyball league when Covid 19 started”.

A student’s response after being asked to use the target chunk “about to” in a sentence.

A student’s response (actually an incorrect response”) when asked to create a list of things that are important to do carefully.  This led to a great conversation with the  student regarding the need for a verb and the danger of jumping to conclusions when seeing the word “careful”.

It is interesting to note that not a single student mentioned anything related to the virus under the heading “Things I try to avoid doing”.  No “hugging friends” or “forgetting to take a mask”. 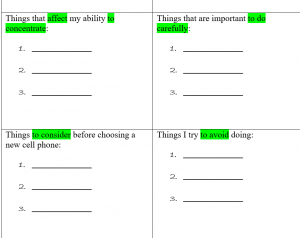 Tasks shown in picture  from this worksheet: https://www.liveworksheets.com/hu1281226qi

This is not something most have my students have expressed in words or in sign language (though a few actually have done so), but are nonetheless showing us daily.  They are delighted to be back at school! Attendance has never been so consistently high, including the students with a rich history of absenteeism. Those who are unable to attend for some reason are notifying us in advance with a sorrowful tone.

That’s the best part of this whole crazy situation.

Do you have examples of things you had never heard students say before the pandemic hit? Share them in the comments!

8 thoughts on ““I’ll miss too much ‘school’ if I come to school tomorrow”. Things Students Never Said Before Covid-19”