I  had my first chance to try Mike Harrison’s Reverse Reading Comprehension Strategy today, with “a twist” and it was a big hit!

The first period of the day gave me the perfect opportunity to try it. Three students were taking a test, three were absent and the remaining two are pretty much on the same level,  comparitively strong pupils. So I called them to the board. Each one of them got a whiteboard marker.

Instead of writing five or six questions I wrote one question on the corner of the board : Why did Branco dive to the bottom of the lake? After we went over the question (they didn’t know “lake” or “bottom”) they wanted to know who this Branco person was and how should THEY know why he did it. I replied that it was up to them to decide and to please answer the question. So they wrote (and then we corrected) the sentence “Branco wanted to study the fish“. I responded to that with question number two: What was he surprised to find at the bottom of the lake? Then they began to get interested. They had Branco find a treasure chest, take it home, discuss it with his wife and spend the money on a new house and car. They wrote five sentences, each one numbered as an answer to a question.

I erased words from the sentences, a fairly large amount and they split the work of filling them back in. Since these are fairly strong students and they just wrote the text themselves this was easy for them. I left this stage after one “erasing exercise”.

I asked the students to turn these sentences into a news report. I told them we don’t have to write everything again, only certain things need to be changed. We looked at every sentece. The first answer now became the opening sentence ” A man named Branco dove into a lake in Italy” and so on. The rewriting took us to the bell.

Later on in the day I repeated the activity with two weaker students (going for a lower level of the national exams but nonetheless still strong enough to TAKE the national exams!). They also came up with a treasure test and had the pirates come and rob the treasure back from Branco. They had to work much harder to create each sentence and needed more corrections so our second stage was erasing words till the bell rang. Rewritng was not suitable here and they REALLY enjoyed the activity as it was!

I also tried the activity with one 12th grade students who reads FAR FAR better than he writes. He always forgets articles andmixes up tenses. However, this activity is a more socially oriented one and giving it to him  alone was a mistake. He wrote that Branco found shoes in the lake and then he threw them back into the lake. I’m sure that if he had had a partner he would have come up with a more interesting idea and then it would have been more fun. Even the policeman I ” sent” to the lake just said “you shouldn’t do that”!

I really feel that my students are benefitting from my PLN!

We spent the day in the south of Israel, with what seemed like a quarter of the population of the country, checking out the red anemone flower fields. 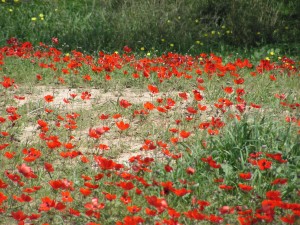 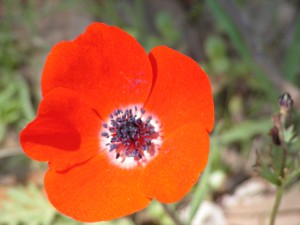 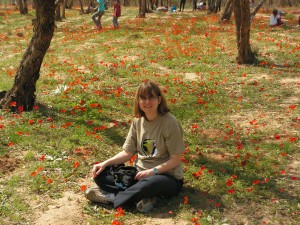 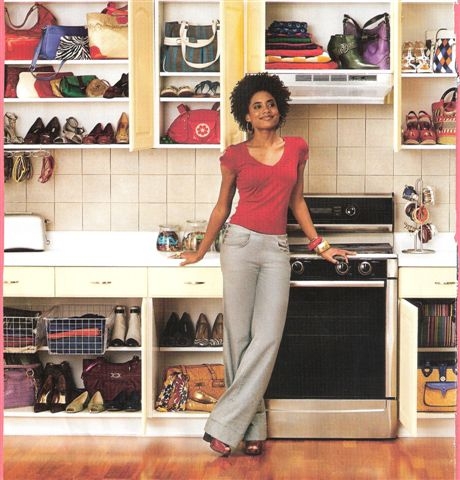 After every lecture I get repeated requests for copies of this picture-activity.

It is finally available in digital format!

As always, two versions, the red one is easier.

Larry Ferlazzo’s lists are a gold mine for eye-catching images. There are so many possibilities here! Just look at this as an example:

Here’s one I chose for starters (some of my pupils are studying architectural – draftmanship). They liked it! Once again, there are two versions, the “red” one is easier and uses Hebrew. 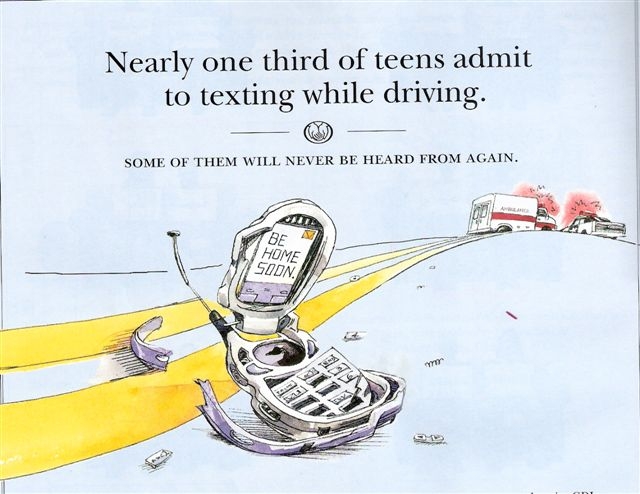 My deaf students are extremely efficient texters (what an amazing invention the cell phone is for them!). Yet I know some of my students text while driving!  “I can text without looking”  they say! True, but what about the reply?

When I saw this ad I knew I had to use it!

Here are two versions I prepared, the “red” one is a bit easier and uses some Hebrew. 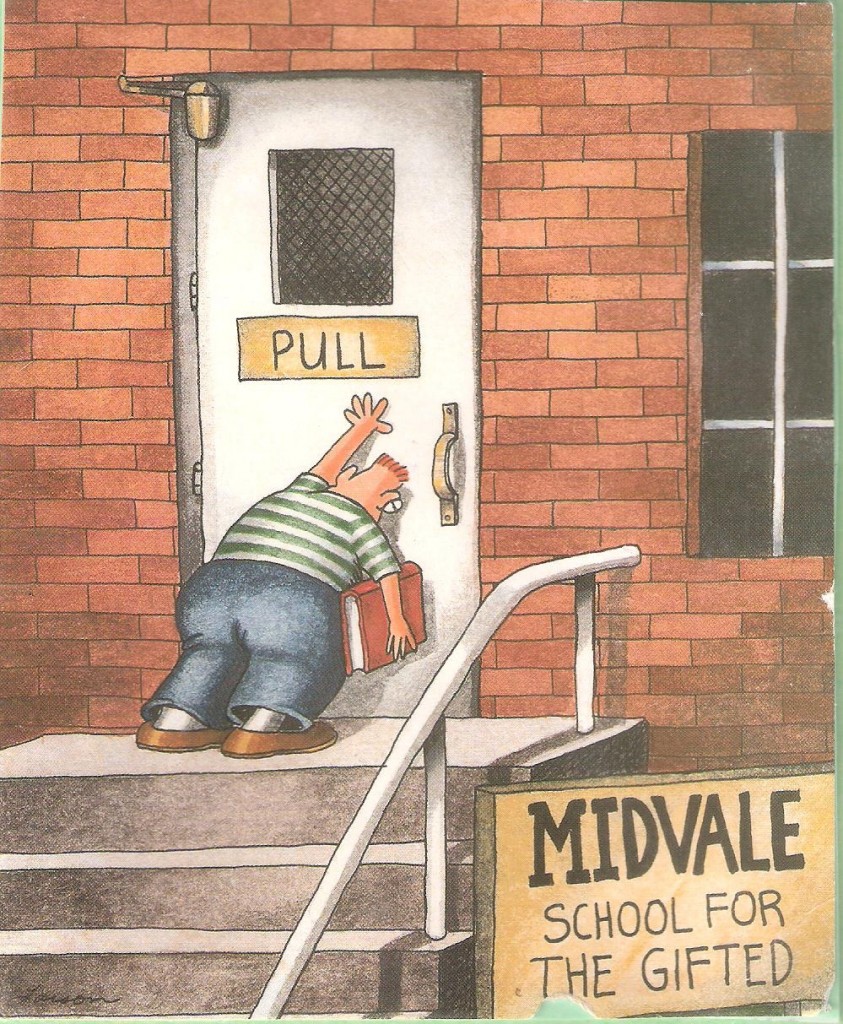 As I mentioned in my previous post, I find pictures to be a useful tool for improving reading comprehension skills at all ages – you just need to use appropriate pictures.

One of the most important skills that  pupils must acquire is answering questions with answers that are relevant to the type of question asked. In order to have the pupils actually focus on understanding the questions we must separate the questions from the texts which are difficult for them. There are a number of ways to do this. Using pictures is one of my favorites.

One of things I do with high-school students is ask “Bagrut Type” (matriculation exam format) questions about an interesting picture. For example, take the question “Where could you find such a picture?” Many pupils tend to respond in a concrete manner; “I can’t find such a picture”.  Yet they must relate to the fact that if its an ad, it would probably be found in a magazine or newspaper, etc.

Pictures are also useful for practicing questions using common tricky phrases such as “the woman looks pleased”. Pupils tend to think that the word “look” only has one meaning and confuse “pleased” with “please”.

Here is one example I use. In future posts I will add more. I’m afraid I do not know who drew this picture (I found it ,slightly torn,amng postcards left to me by another teacher) and will gladly give full credit if anyone does know!

As a teacher of deaf and hard of hearing students I’m constantly “visualising ideas”. By “visualising” I mean a multitude of things.

For starters, there’s Sign Language, an absolutely visual mode. When something is large, when you sign you show just how big it is. And its not just your hands involved, its your facial expressions too.

But that’s just one aspect of it. About half my students don’t use sign language (many have cochlear implants). Yet just talking about something (whether using speech, sign language or both) is not enough for these pupils to really and truly understand ideas and concepts I’m trying to teach. Everything is always supported by the written word. In addition I use pictures, graphs or just plain line drawings. And to make those truly “visual” in the students’ minds I need a lot of examples (as closely related to the pupils’ lives as I can). In fact, I even have reading comprehension exercises based on pictures (more about that in another post)!

This need to visualize everything has become such a part of me (I’ve been teaching for more than 25 years!) that even when lecturing to hearing people I use pictures. I must admit the feedback has been very positive! As you see, I’ve even added a picture here!