Have you ever seen a bicycle for five?!! My husband just did! I immediately wanted to use the photo for this post for the following two reasons: 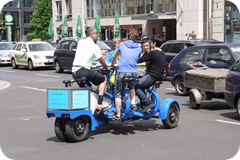 Part one of this post was about my experiences as a pupil (Comment on Scott Thornbury’s “Open Spaces” – My Experiences Both as a Pupil and as a Teacher).

I fully intended to write the continuation of the post in the same manner. But I’ve been sidetracked by thought-provoking questions raised by fellow bloggers. What have been the influences on the way I teach (Tyson Seburnt’s “Influential ideas on my approach to ELT”)? Has my own autobiography as a learner shaped my teaching (Willy Cardoso’s “Off-track existentialist young-being” )?

Like the bicycle in the photo I’ve been going off in different directions. So…

No! here’s the short version!

Now I teach in the format of a learning center with 10thto 12th graders (and a sprinkling of kids up to the age of 21 or so) all mixed together in one open space. Levels ranging from ABC to top levels. All have hearing problems, some have additional problems, many have emotional issues.

Sometimes the open space format is wonderful!! Kids form different “coalitions”, its non threatening, the kid “jumping around” who needs to get up every 10 minutes doesn’t stop the others from learning, the kids are progressing at their own pace and much more. I’ve been posting about this a lot.

But sometimes, (especially when there are too many pupils and no teacher-aids) like the bicycle in the photo, it seems that everyone is pulling in a different direction and needs something else and I am frustrated! Some things are easier to teach frontally to groups that are tracked by level. Although I HAVE taught a few frontal lessons that included EVERYONE, the sad fact is that’s good for special events. Those bright high-level children who are writing essays in English and those that need to be shown why “at three o’clock” cannot be the answer to the question: “Where does Tom live?” cannot be taught frontally together.

But that bicycle in the photo DOES move forward, and we do too!

2 thoughts on “Part Two of Comment on Scott Thornbury’s “Open Spaces” – Getting Sidetracked!”