Just me, 8 students and a whiteboard. And one imaginary millionaire (one student suggested “billionaire”) who is sending us on an all-expenses-paid trip to Disneyworld, Orlando.

Overall I think the lessons went well. The main issue that needs improving is the pace. 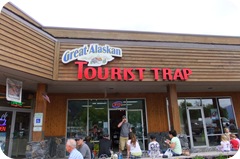 The ‘’problematic” 8th graders didn’t bother to show up. There was only one tall, lanky, hyperactive boy who kept moving either his chair, the desk, rolling a water bottle or doing something else. But he was participating too.

We started off with a discussion in Hebrew (which I didn’t even try to add English to) just to set the framework of the story. I “introduced” our benefactor and asked what you need in order to go the States. Some kids didn’t know the difference between “a passport” and “an identity card”. Many didn’t know what an embassy was or that you needed  a visa for such a trip. They didn’t know the words for these things in their L1, it wouldn’t be effective to work on these words in L2 when others are more commonly used.

The “action” began when I asked them what they would pack for their trip. I wrote what each student suggested on the board in a full sentence, asking them whether to add “has to take” or “wants to take” . That may sound a slow process but for that part the pace was actually fine. This is because a lot of discussion was needed whether some of the suggestions were logical  or not. For example, one student suggested bringing a winter coat. I pointed out that I had told them that the weather in Orlando is hot and rainy. He replied “See! You said it again! You said it is rainy so I need a winter coat”, In Israel it only rains in the winter, when it is cold, rainy and hot is a difficult combination to imagine!

At some point they all started giggling and one boy handed me a note, saying this is what he wanted to take. They all looked at me to see my reaction. It was a word badly spelled in Hebrew and I thought it said “hay”. I told them I don’t understand why they want to take food for cows. There was some consultation and the note was corrected. Turns out they meant “bra”. “Of course” I said, “very important item to take! Don’t forget underwear too”! There was a lot of positive laughter and that was good but I didn’t cooperate when they hyperactive boy wanted to drag on the topic and learn the words for different kinds of underpants (remember, these are 13 and 14 year olds!).

But now that there were all these sentences on the board I couldn’t go on – there was a lot of new vocabulary there.

So, I pulled out a travel game called “trouble” whose main appealing feature is that the die is encased in a plastic bubble. Fun to press (you have to press hard!). One by one each student pressed the die, and I erased a corresponding number of words on the board. That student had to come and fill the words back in. The student at the board could ask the others for help.

Here was the problem with the pace. On one hand, the students liked the activity and did help each other. But it took a long time and there was a lot of unrelated talking in between.

I didn’t want to split them into groups for two related reasons. I don’t know them well enough to build balanced groups AND it is much safer not to encourage competitive behavior. Some of these children respond badly to pressure and I don’t know which ones. So I really don’t know how I can improve this part. I’d be most grateful for suggestions!