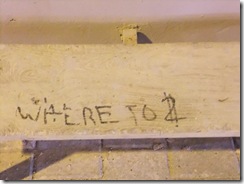 (photo of a bench in Tel-Aviv, taken by me!)

In his  post “P is for Problematizing” Scott Thornbury introduces a very interesting activity.

He suggests a delightful way to highlight the importance of the indefinite article “a”.

Of course, me being me, I didn’t try the lesson in the manner he described.

I ran the sentences in the original activity through Google Translator and made the following astonishing discovery:

Google translator can’t tell the difference between sentences such as

A girl with a long hair.

A girl with long hair

Google translator translated both this pair of sentences and all the others in the original post in an identical manner into Hebrew.

Since I’m very interested in redesigning my homework tasks to take into account the fact that the students use Google Translate intensively at home (more about that here) I decided to use the sentences as a homework task.

I give short homework, once a week, often designed to highlight a very specific topic or aspect. So, highlighting the importance of the article “a” seemed just the thing to do.

I called the task: You are SMARTER than GOOGLE Tranlsate.

I gave instructions in their mother tongue, reminding the students of what he had learned in class about the article “a”. I also explained that the sentences should be translated differently but Google doesn’t. I asked them to take note of the extra options Google Translate offers and translate the sentences correctly into Hebrew.

I gave them the following sentences, chosen from the original post but purposely grouped together to make it easier:

1) This is a room with a glass on the floor.

This is a room with glass on the floor

2) This man is buying paper

This man is buying a paper

This is the room with light in it.

She is a girl with long hair.

For some of the weaker students I supplied the sentences translated into Hebrew, but jumbled up.

Well, I’ve checked most of the homework tasks. Turns out I gave a lot of thought to one aspect but ran into trouble with other aspects.

The students who got the translations in the incorrect order did well. They had the article “a” isolated and the difference between the sentences with it and without it was the main thing they had to pay attention to.

The stronger students ran into trouble, in varying degrees.

In the original post the students are asked to draw the sentences. That didn’t seem suitable for homework tasks which I receive by email. But translating is a different skill and I should have known better.

Some students translated “a glass” as meaning “ a single piece” of glass, not a glass you drink from. Only one student translated “ a paper” as a newspaper.

And, surprisingly enough, it was the fourth pair of sentences which students had trouble with (I thought it was the easiest pair!).

6 thoughts on “Mixing a Thornbury Post, Google Translator and My Students”