I’ve asked the students who are studying the story Mr. Know-All (by Somerset Maugham) to a make a word cloud of the sentences describing Max Kelada’s appearance. 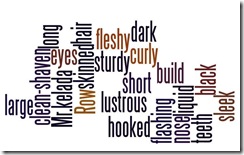 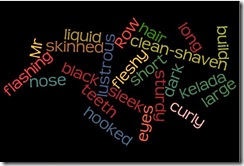 I’m still looking for the best and easiest way to showcase the word clouds.

At first I made a page for them on our class site. There are four clouds there. The one that looks small and odd is the one I added the easy way – embedding the code. I tried resizing it but it doesn’t “behave”. The other three I copied with Jing, pasted into paintbrush, saved as a picture (in Jpeg) and then uploaded them to the page. That’s actually less work than it sounds as it goes fairly quickly. On the other hand I still have many word clouds to upload!

Without solving THAT problem I decided to move the clouds to simple booklet. They take too much space on the wiki page and I want them to be large. On this site each student will get a page.

However, I have the same problem. If I embed code, on this site it won’t resize at all! If I repeat the process described above it looks very nice.