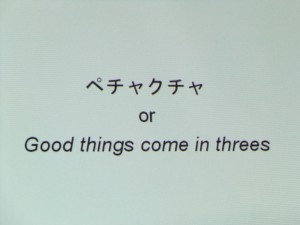 One Gavin Dudeney, three experiences for me!

The very first session I chose to go at ETAI didn’t take place. While there are sessions cancelled due to unforseen circumstances at every conference, there was some lack of clarity regardng the situation and there was no note on the door. A group of people were sitting in the room, waiting and talking and it so happened that Gavin Dudeney had joined the teachers sitting directly behind me! At conferences I must admit to being rather excited and perhaps somewhat pushy and I butted right into the conversation! Its quite exciting to meet someone in person who knows (not just virtually) all these people from #eltchat! Luckily he was very friendly and patient and didn’t look at me oddly when I came to him the next day to say that I had tweeted from his session and it was my first time EVER tweeting from a conference! But most importantly, he meant what he said when he told me to write him regarding my question relating to technology and my deaf / hard of hearing students. HE REPLIED! I don’t take such things for granted. 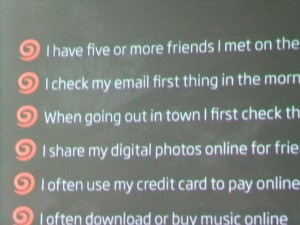 I attended two sessions of Gavin Dudeney’s talks. In the first he talked about different kinds of digital litercies but kept us all on our toes with all kinds of questions. That was no easy task becasue the room was PACKED and people were sitting almost on top of him. The airconditioner in the room wasn’t geared for such a crowd. Dudeney seemed unruffled and simply took off his jacket 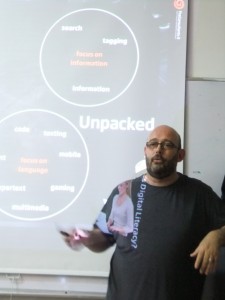 I particulary liked his emphasis that we should be interested in PEOPLE using technology, the skills people needed to know so that technology would  work for PEOPLE!

The second session focused more on practical applications. Adele Raemer, in the preceeding session, had shown us the power of  Word Clouds (among many other things!) and Dudeney emphasized this, citing research that there are advantages to students not always seeing words in straight lines. He gave us a very powerful demonstration of how having an audience (online) can help students improve their speaking skills. This time the session took place in the auditorium! 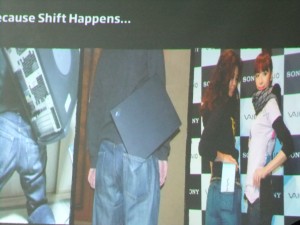 The third  experience was just watching Gavin Dudeney present and participate in the Pecha Kucha. One of the great things about ETAI is that we are all teachers sharing our work. However, I found it very instructive to see a seasoned presenter in action. I was as interested in the HOW as in the WHAT. Dudeney had all of us glued! 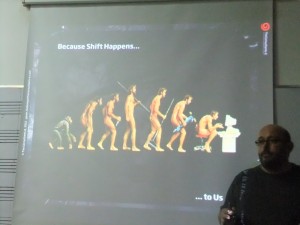