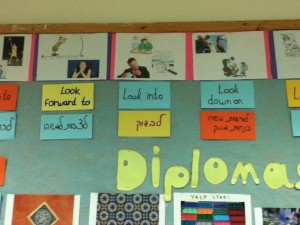 Recently, my youngest son finally organized  the school-related things he had left in his overstuffed drawers (he graduated high school about a year and a half ago!).  He found several notebooks that were only partially used.

I ripped out the used pages and took them to class. I had a vague idea of using them for scrap paper. We use scrap paper for many things in our English Center and always need more.

For some reason I placed them in the cupboard.

One of my 17 year old deaf  students is obsessed with rules. He wants a rule for everything so that he can learn it by heart and do well (he thinks!) on the reading comprehension exams. He battles constantly with the fact that the same word can be translated a bit differently in different contexts even if both translations are similar in meaning. He finds it difficult to be flexible and  put together the words he has translated so that they make sense. He takes it as a personal affront when he discovers there’s another word in English to express a concept he already has mastered a word for.  He wants English reading comprehension exams to turn into something he can memorize the rules for and complains that I’m not giving him long lists of rules for every possible combination of words and phrases he could encounter in a text.

Yesterday, when he expressed frustration at me for not having giving him a list of all the possible “look” phrases (we have the most common ones hanging on the wall in class) I had an inspiration.  I went to the cupboard and gave him one of the notebooks.

“This is just for you. It will be your rule book. Whenever you encounter something that you feel you want the rule for, you can copy it into this notebook. You can keep it here, on this shelf, in the classroom”.

He was so moved! It was amazing.

A slightly used notebook became the center of a “special moment” with a student!

Now to see what he actually does with it. It will be interesting to follow.

8 thoughts on “A Tiny Notebook Story”