If you find it somewhat confusing that the title mentions 36 students but my “language plant” (thanks to David Warr at Language Garden!) refers to 60, you aren’t the only one.

I began a summer job, teaching at a private language school which has a special course for adults (hearing!) who need to improve their English in order to be accepted to college. This summer course has an online component (which I don’t prepare) and I am doing the face to face meetings. In the course we will focus mainly on reading comprehension skills for weak learners, which is, of course, my specialty. Just not usually in such a setting! But in the spirit of The Teacher James’ post “Just Say Yes” it feels good to move slightly outside my comfort zone and enjoy being a teacher who can also use conversation as a tool!

When I took the job I was told that two groups were being combined and that there would be approximately 60 students. I REPEATEDLY asked for the list of registered students before the first lesson and was told again and again, that due to the increased number of students registering for the course, the list wasn’t ready yet and it would be emailed to me shortly. I was quite concerned that there would be 70 or more students and spent quite a lot of time debating (agonizing?)about a warming activity suitable for the first lesson with such a large group.

I finally received the list of students at exactly 6:30 in the evening, when the first lesson was scheduled to begin. 36 students! If only I had known! Pity the classroom is SO big, some students sat quite far apart from each other and pretty far from me. They are adults of all ages and very varied backgrounds.

I began the lesson with a moment of morale building (plan to start each lesson like that!). I brought this large poster of door knockers. The course is labeled as level D (weak!) so I told them that “D” stands for DOOR and this is the “open door course”, the course which will help them open the door to college if they study. That went down very well.

In regards to the warming activity, despite the group being smaller I stuck to my original plan. These are people who haven’t read in English for quite some time (for some, quite a long time). I felt we needed some unscripted time to review basic “Wh” questions but also to see what would come up, what were they saying and asking. So I presented them with “The Kitchen Picture” : 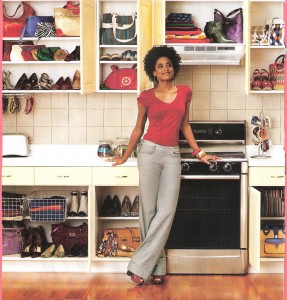 I wrote the first question:

What did this woman do?

A student said : “She smiling”. So I asked them about the “ing” , we looked at the “did” in the question and someone asked about “will”. Some of the students were saying:  “Oh yeah, I think I learned this once.” We mentioned better answers to the question. Then I asked them what other questions could we ask about this picture. They came up with the question:   How many bags does she have?”

They had all kinds of wild theories about what the difference between “how many” and “how much” was! They also came up with the question: “Where does she live?” The students agreed that it is probably a city. I added another question: “Where can you find such an ad?” Some students weren’t sure the word “magazine” was in English! They couldn’t think of a “who” question so I asked “Who created this ad?” They needed hints to guess the source (a credit card company) but then the class came up with the next question: “Why did they create the ad?” (easy one to answer!).

I asked the next question: “Do you think this woman has children”?  There was a resounding “NO!”. So, I wrote “How do you know?” The older students supplied the answer to that one –  children need food!

We never made it to “When” (I just added it on the board) as I felt we had had enough and it was time to move on to the first text which I was supposed to use. I really felt that now everyone seemed focused and I was hoping that some prior knowledge had begun to be prodded into wakefulness. In any case, the students (and the teacher!) looked less tense than they did when they walked in the door.

Next lesson on Thursday!